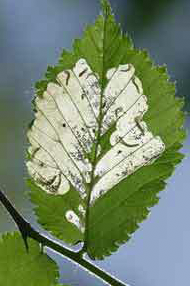 The Leafminer is a tiny ‘worm type’ insect that actually lives and feeds between the upper and lower layers of leaf tissue. When the leaf is held up toward the sun, one can actually see the worm moving within the leaf as it feeds. It feeds off the green chlorophyll, leaving translucent channels in scripty, irregular trails throughout the leaf. The trails are very noticeable and stand out prominently.

Sometimes the Leafminer just eats all of the chlorophyll out of the leaf as shown in the photo.

Looking even closer, one will notice tiny black specs behind the insect within these trails. These are the ‘droppings’ or ‘excrement’ from the hungry Leafminer.

Although Leafminers favor a variety of trees and shrubs, their favorite Illinois targets include White Birch, Hawthorne, Black Alder, Elm and several varieties of Arborvitae (although they are not as easy to identify in Arborvitae due to the fact that Arborvitae are conifers).

Leafminers are the larvae of flies, moths and/or beetles. They pupate within the leaves and emerge as adults. The adult insects then feed on the leaves externally, chewing holes or notches in the leaves.

Leafminers are not life threatening to infected plants but can make a tree appear weak and unappealing as severely damaged leaves fall to the ground.

Leafminers can appear at different times on different types of plants but are most noticed in early summer. Typically, once a tree has attracted Leafminers, it will be attacked again and again in years to come.

Leafminers cannot be controlled with basic, topical insecticides. Systemic insecticides work best if applied at the proper time. These products may be applied by spraying, trunk injection or soil drenching depending on the particular situation and tree species in question. 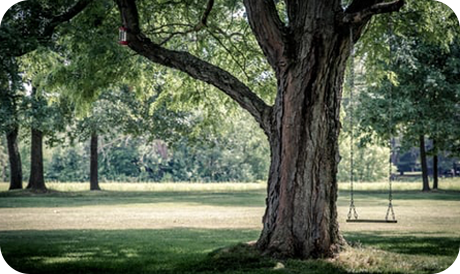